All Books Links to Amazon

Link to Amazon
A Christmas Promise

A love that cannot be bought or sold proves to be the greatest gift of all.
Weddings are supposed to be joyous occasions—especially when a couple seems as well matched as Randolph Pierce, Earl of Falloden, and his bride-to-be, Eleanor Transome. Ellie brings to the marriage a vast dowry, while Falloden, though distant, is handsome, tremendously desirable, and possessed of a title most young ladies can only dream of sharing.
Yet Ellie is not most young ladies. She knows that she must honor her dear father’s dying wish for her to wed the proud earl, but she dreads a lifetime in a union without love—and how can Falloden claim to love her when he married her only for her fortune? As Christmas descends upon the Falloden manor, the warmth of the season may yet melt away the trappings of duty and wealth, leaving behind only a man and a woman destined for each other’s arms. 306-pages.

Link to Amazon
The Devil in Winter

"I'm Sebastian, Lord St. Vincent. I can't be celibate. Everyone knows that."
Desperate to escape her scheming relatives, Evangeline Jenner has sought the help of the most infamous scoundrel in London. A marriage of convenience is the only solution. No one would have ever paired the shy, stammering wallflower with the sinfully handsome viscount. It quickly becomes clear, however, that Evie is a woman of hidden strength—and Sebastian desires her more than any woman he's ever known. Determined to win her husband's elusive heart, Evie dares to strike a bargain with the devil: If Sebastian can stay celibate for three months, she will allow him into her bed. When Evie is threatened by a vengeful enemy from the past, Sebastian vows to do whatever it takes to protect his wife . . . even at the expense of his own life. Together they will defy their perilous fate, for the sake of all-consuming love. 384-pages. 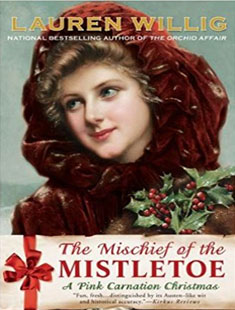 Link to Amazon
The Mischief of the Mistletoe

Despite her dear friend Jane Austen's warning against teaching, Arabella Dempsey accepts a position at a girls' school in Bath, just before Christmas. She hardly imagines coming face-to-face with French aristocrats and international spies. Reginald "Turnip" Fitzhugh-often mistaken for the elusive spy known as the Pink Carnation-has blundered into danger before.
When Turnip and Arabella find their Christmas pudding yielding a cryptic message, they are launched on a Yuletide adventure. Will they find poinsettias-or peril?
384-pages. 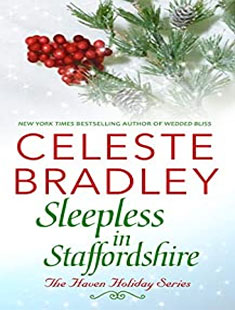 Link to Amazon
Sleepless in Staffordshire

Funny historical holiday romance - Grief-stricken widower Lord Matthias Waterford, master of Havensbeck Manor, sends messages in a bottle to his lost wife and child. He throws them into the river by night, never knowing they are being found and read by spirited vicar’s ward Bernadette Goodrich! A Christmas Ball brings the two together in a plot by a mischievous little brother and an interfering butler! By turns heartfelt and hilarious, Sleepless in Staffordshire is a charming Regency romance take on the romantic Nora Ephron film "Sleepless in Seattle" starring Tom Hanks and Meg Ryan. 148-pages. 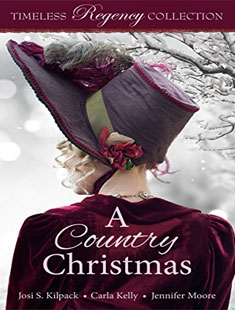 Three Regency novellas (327-pages) by Josi S. Kilpack, Carla Kelly, and Jennifer Moore.
SAINTS AND SINNERS by Josi S. Kilpack. When Neville Franklin’s best friend Burke wants to wager who can kiss Eloise first, Neville puts a stop to it. Eloise has been his friend since childhood, and, well, she’s off-limits. Especially to Burke. As Burke pursues Eloise and claims that she has a tendre for him, Neville becomes more and more protective of the girl he grew up with. On the night of the Christmas ball when Eloise appears in a dress that clearly shows that she is no longer a girl, but a beautiful woman, Neville realizes that his protective feelings toward Eloise have turned into something greater. But now, Neville’s best friend stands in his way.
THE CHRISTMAS ANGLE by Carla Kelly. Sailing Master Able Six is on half-pay with the British navy, biding his time during the uneasy Peace of Amiens and the resumption of war. Meanwhile, he’s invited to teach young pupils at the home of a vicar outside of Plymouth. There, he unexpectedly meets Meridee, the spinster sister-in-law of the vicar. From the moment Able sees Meridee, he’s entranced. When she asks him about his past and discovers his remarkable yet troublesome gift, he realizes he’s finally found someone who can care for all of him. Sadly, Able’s low station and half-pay gives him no way to provide for a wife. Meridee’s lack of dowry and dependence on relatives makes their union impossible at best. But isn’t Christmas a season of hope?
THE PERFECT CHRISTMAS by Jennifer Moore. Archie Clawson wants nothing more than to give Jane the perfect Christmas. Since her troubled childhood, she’s not experienced a Christmas with all the trimmings. To top off the perfection, he also plans to ask her to marry him on Christmas Eve. But as he and his friends, including Jane, travel to his country home, they are caught in a snowstorm and discover that notice of their arrival did not get through to the house staff. Worried over the disappointment he must be causing Jane and the complete shift in their planned Christmas, Archie fears that he’s misinterpreted her kindness towards him and lost her favor forever. 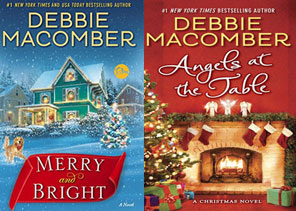